“The decision that Assistant District Attorney Robert Kidd and I reached today was a decision that certainly took into consideration the cost to the taxpayers in Somerset, but was also made with our concern for their children, the children of Bristol County and beyond in mind. Climate change is one of the gravest crises our planet has ever faced. In my humble opinion, the political leadership on this issue has been gravely lacking.

I am heartened that we were able to forge an agreement that both parties were pleased with and that appeared to satisfy the police and those here in sympathy with the individuals who were charged. I am also extremely pleased that we were able to reach an agreement that symbolizes our commitment at the Bristol County District Attorney’s Office to take a leadership role on this issue.

It’s very inspiring to me and I will carry that with me in my heart. Thank you.

Rabbi Katy Allen: Will you be an example for across the country?

Sutter: I certainly will be in New York in two weeks, how’s that? I’ve been carrying around Bill McKibben’s article in Rolling Stone.

I’m sending a message that this was an act of civil disobedience. I’m not at all disputing that the individuals were charged, but this was the right disposition, it was reduced to a civil infraction, it was civil disobedience after all, and restitution is going to the Town of Somerset in full, and part of the state police’s expenses will be paid for, so this is about as good and reasonable a disposition as could be reached.

Climate change is one of the gravest crises the planet has ever faced. The evidence is overwhelming and it keeps getting worse. So we took a stand here today, the Bristol County District Attorney’s Office.”

*This is an informal transcript based on a video taken outside the courthouse.

This morning marked a significant victory for the climate movement. Approximately 100 supporters gathered at the Fall River Justice Center for the scheduled trial of climate activists Jay O’Hara and Ken Ward. Bristol County District Attorney Sam Sutter dropped the conspiracy charges and reduced the other charges to civil infractions. O’Hara and Ward will pay $2,000 each in restitution to the Town of Somerset, Massachusetts.

O’Hara, Ward, and their attorney Matt Pawa, spoke to supporters outside following the conclusion of events in the court room. Sutter also addressed the assembled crowd, saying “[The agreement] was made with our concern for their children, the children of Bristol County and beyond in mind. Climate change is one of the gravest crises our planet has ever faced.”

A full press release will be posted here later today. Follow the commentary on Twitter via #ClimateTrial. More details and photographs are available at https://twitter.com/BetterFuturePro 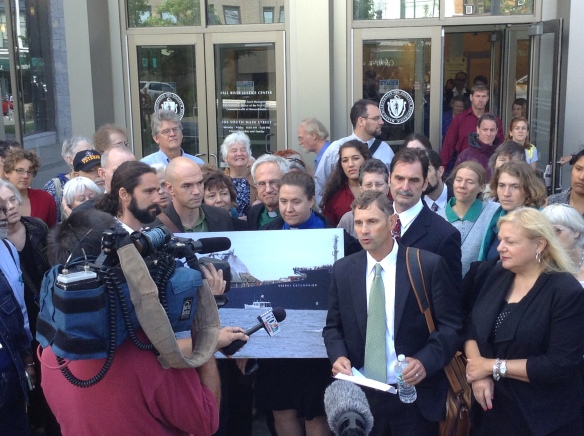 Jay and Ken gathered outside the courthouse with their lawyers Matt Pawa and Joan Fund, along with climate activist Tim DeChristopher and other supporters.

Lobster Boat Blockade: Jay and Ken talk about why they did it from Mate Corazón on Vimeo.

If you are in the Boston area, please join us for a song circle to support Jay & Ken’s lobsterboat trial this Sunday, August 31, at 7:00 p.m. at the First Parish Church in Cambridge (3 Church St., Cambridge, MA). We will share the songs that will be sung for Jay O’Hara and Ken Ward’s historic tobsterboat trial on September 8th & 9th in Fall River, to contest that action! We’ll be sharing some of the music inspired by their action, some of the new songs being written by the climate movement, as well as old classics that have helped bring justice in years past. Please bring instruments, songs of your own to share, and friends. RSVP on Facebook.

Yesterday’s Boston Globe featured Ken and Jay in a piece that outlined the lobster boat blockade action and their pioneering use of the necessity defense in a climate trial. While we’re pretty sure that neither of them have actually uttered the words contained in the headline, the story provides a thorough history of the use of the necessity defense as a political strategy and highlights the importance of their trial as a potentially historic moment for climate change activism.

“IF THE FALL RIVER jury accepts Ward and O’Hara’s arguments and acquits them—and there’s no guarantee that it will—it will be following in a centuries-old tradition that goes back much further than the modern defense tactic. […] In each case, the jury and the defendants have agreed that something more than the fate of a single individual was at stake; what’s occurring is a referendum on the wisdom of government policy itself, with the suggestion that the normal channels for changing it are inadequate.”

We anticipate a large crowd at the Fall River Courthouse in support of Jay and Ken during the trial on September 8 and 9. The organizing team has been working hard to figure out arrangements for attendees, including housing and transportation. We’d love to have you, too! If you are interested in attending, please do the following:

1) Read Jay and Ken’s invitation to attend the trial
2) RSVP here so we can keep you updated on new developments
3) Read the new If You Come page, which will let you know what to expect and how the logistics will work

We look forward to seeing you there!

The Fall River District Court has set September 8, 2014,as a firm trial date! The case has been given “priority status,” in light of the use of the necessity defense and the need to schedule out of state expert witnesses, and the prosecution has been asked not to schedule other trials on that date.

We are lining up an all-star list of witnesses, and a whole slew of activities to accompany the day. This is a big moment for the climate movement, and we hope you’ll join us.

Welcome to the new website!  As Ken and Jay prepare for trial, we’ve abandoned coalisstupid.org for a new site.  We’ll be adding content as the trial gets closer.  We expect this to be a place not only for information about the trial, who’s going to testify, the legal process and activities inside and outside the courthouse, but also a place for new thinking about the climate movement.  Glad that you’ve joined us!